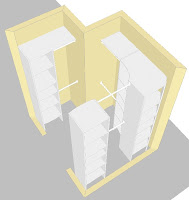 Saturday at 12:20pm, our lives had the potential of heading toward some drastic change. We had entered the "Home of Hope" raffle to win a new 2029 sq. ft. home in North Fresno. Call it a fleece of sorts, but we've been wondering if a move to the valley should be in the works. $200 went to local charities and we had our name in there twice.

We skipped out on Nephew Sam's 3rd birthday party and headed out to the drawing. We arrived with just moments to spare, and heard the last name "Carey" come out over the microphone. Our hearts stopped for a moment as we quickly rewound what we had heard and realized that there was a different first name attached. Maybe they had mixed up my name, couldn't read it or something like that. But alas, it was not to be, some other Carey had won our house.

So to follow up on a promise we made to each other, we headed straight to Home Depot (after a stop at In-n-Out and Costco) and decided to remodel our closet. After 1 1/2 days of emptying the closet, painting it, building the organizer, installing it, and putting everything back, we're finished... and oh is our closet the talk of the neighborhood. OK, well actually the Johnsons are the only ones to have seen it so far, and they're probably not talking about it; but hey, we sure like it.
at November 12, 2007

I'm so glad you have your closet organizer in!!! I know you are both going to love it!