It is impossible to capture in words what we experienced yesterday and today.  I wrote in my journal last night for over 6 pages, and still was maybe half way through everything just from yesterday.  What a journey of sight, sound and emotion.  Many things turned out differently than expected, and yet everything turned out right! 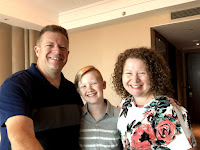 9:23AM - We took a quick picture in our hotel room on the way out and I posted it on Instagram, hoping that our friends back in the U.S. would see it and remember to pray for us. We were heading out to get her!

The drive took about a half hour through the rain and took us into an older part of Nanchang, much less modern and, as April would later describe it, a lot more like we expected China to be. We walked up a wet walkway and entered a nondescript building,  heading for the 25th floor. The door opened up and there we were at the Jiangxi Provincial Registration Center of Foreign Adoption and Foreign Marriage. This is where we would be meeting our new daughter in just a few minutes. We rounded a few corners and were in the room. Also waiting there was another couple we had met the day before at our hotel. They were from Nashville and were adopting their second child from China (both with albinism.)

9:56AM - Through the entrance walk several people and it's instantly obvious that they are the ones bringing the children. The other family walks up and takes their new little 17 month old girl into their arms - and then we see a man holding Yun Xi. That's our girl! What do we do? Do we just go take her out of his arms? Do we wait? We'd imagined this moment for a long time, and of course it's playing out differently, but that's okay.  She definitely  has a bond with this man. He has traveled with her all the way from Beijing to bring her to us and she does not want to leave him. She was not happy! They very soon place her into April's arms and then she really starts to scream. I'm thinking to myself... this girl has some strong lungs and she does NOT want to be here.  After a few minutes, April hands her to me, and immediately she takes the screaming to a whole new level. For both of us, we're experiencing a mix of emotions. We're so sad for her as she's obviously is confused, upset, and more than likely grieving yet another major loss in her life. We both recalled later that it was almost as though she knew what was happening. And yet we're also grateful that she's screaming and reaching out for this man that she knows. It means that she has experienced connection, and even though she's upset at leaving him, it gives us much confidence that she will learn how to connect with us. This is not always the story with adopted children, and it's something we've been spending a lot of time praying over for the last few years, long before we even knew who she was. 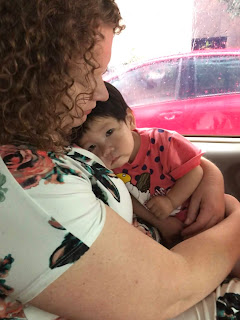 10:15AM - We get all her feeding supplies and medications and we're on our way. We haven't even signed a single piece of paper yet. That would be coming tomorrow, but for now they give us 24 hours to consider her and be sure that we truly do want to adopt her. In our hearts and minds this decision was made up long before we arrived in China, and one we were sure we would not go back on; but that's the China process, and we're going to take this little girl back to our hotel and get to know her.

10:20AM - We're in the car and on our way. The driver starts leaving and something amazing happens... she just leans into April and is comforted. No smiles. No interaction. No looking around. But for this time in the car, she's settled... and she's settled with April. I start to just lean in and tell her stories about Titus and Audrey and how much she's going to love them, and how she's going to need that strength she obviously has to protect herself from them pushing her around. For the next while, she won't leave April's arms. We try to have me hold her a few different times, but she'll have none of that, and I'm okay with that. She's bonding with April and that's a good thing! As we get to the hotel, she's got her thumb in her mouth and continues to lean into April. She needs her mama! We finally get back to the room and begin getting settled in with her. 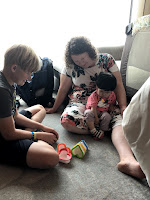 11:08AM - We finally set her down on the floor nestled in close to April, and give her some toys. Let's see if she'll play. For the next several minutes she plays, leans into April, plays a little more, leans in more; and she's even playing with Peter a little bit. Check out the video I posted on Instagram. I've been doing my best to play with her, do a little peek-a-boo, and talk to her a lot.  Pretty soon I stand up to get something and she's tracking with me. Progress! April needs to take a break, so it's my turn to try to hold her, and amazingly enough, she lets me. She even lets me giver her a bottle. I can't even begin to tell you all how important this is that she's attaching to both of us. From this point on, she has allowed either of us to hold her and comfort her. When either of us approaches her, she'll reach out. And boy does this girl love to cuddle. We heard that early on about her, and it's definitely true. She will just rest her head on our shoulders, put that thumb in her mouth, and finds her rest. 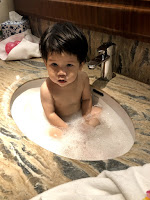 Afternoon - She took a nap next to April. We went on a family walk through the hotel, and then started feeding her.  She has been a total champ. Our guide Mary had to go out and buy us a rice cooker so we could make a special protein-free rice for her here in the hotel room. She's eating the rice, enjoys puffs, banana, and pretty much anything we give her.  It's time for us to get some room service and feed ourselves. Tired and yet encouraged, our first day with her is going better than we could have imagined. She had even allowed April to give her a sink bath. (Our adoption workers had warned us against trying a bath for the first few days because they said it was often quite traumatic for the child.) 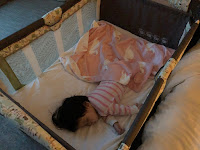 7:26PM - The schedule they gave us for her says she normally goes to bed at 7. We're basically preparing ourselves for the worst. We'll probably be awake most of the night. She'll probably scream a lot. She'll probably be sleeping next to April all night, leaving April exhausted. None of that! Around 7:15, she starts to fall asleep on April. A little while later, April sets her down in her crib. She turns over, sticks that thumb in her mouth, and stayed asleep... and she didn't wake up till 6:30 this morning. WE ALL GOT A FULL NIGHT OF SLEEP!

As I mentioned earlier, with China adoption, you don't sign the official adoption papers until you've had 24 hours to spend time with your child. We woke up slightly anxious, but definitely excited for what was to come today. Time to head back to the same location where we picked her up yesterday, but this time to make this official. We had been warned that this day would be hard and chaotic, that we'd be in a room with many other families adopting, and that there would be kids screaming everywhere, and that basically we needed to grin it and bear it. It was nothing like that at all... 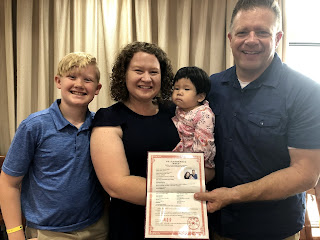 9:50AM - We're in the same room where we picked her up yesterday, and there are only two other families there, both of whom we've already gotten to know back at the hotel. We have some great conversations with each of them about how the first night had gone. The adoption officials we interact with are friendly and obviously grateful.  We sign lots of papers, take official pictures for the paperwork, sign some more papers, and then at 10:19 our guide Mary walks up to us with the official adoption certificate. She is now ours!

As we wind down Day 6 in China, we are so grateful for our new Emilia Mae Yunxi Carey. She is beautiful, quiet, loves to play with her stacking cups, knows what she likes and doesn't like, eats well, sleeps well, and cuddles with her mom and dad. The trip is far from over, but for now we're settled in and enjoying our new life as a family, longing all the more to be home and begin the new normal.
at July 09, 2019

Wow, praise the Lord.
It's great to hear how quickly and how well she is bonding with you two.
What a special time in the Carey family. Blessings!

Hard to read this post through all the tears! So happy for you Carey family, and your sweet little girl. You're an inspiration to many, I now me specifically. Thank you for openly and honestly sharing your journey, the good and the bad. Congratulations - can't wait to read the next post...

Ugly crying over here! God is so good! He takes brokenness and makes it whole! He puts orphans into families. Rejoicing with you all and praising the Lord that even though she can’t be with birth family that she is already RESTING in your comforting and loving arms as a Carey. She has no idea yet how amazing she is and how much she will blossom with the nurturing love and discipleship of your family! Hugs to you all! ❤️